Sting’s music has been a constant presence for a good part of my life. Be it his songwriting or his vocals, his clever instrumentation or just the themes that draw him, many of his works have featured prominently in the soundtrack of my own life. It’s not to say that every little thing he does is magic, because, you know, he has also written some gold standard tripe. Nevertheless, the fact that he’s been an English teacher and his lyrics are often beautifully layered for an English Literature student like me, has meant that analysing his work is second nature to me.

Obviously then, his new album The Bridge was something I eagerly looked forward to. His 15th so far and the first in over five years that is in the rock realm, it was slated for release on the same day Adele aka Goddess of Heartbreak’s album 30 was released. It was also the day Sir Rod Stewart released an album, but we shall not digress. In the last decade alone, Sting has drawn inspiration from his childhood in The Last Ship (2013), reimagined his solo classics in My Songs (2019), collaborated with Shaggy in 44/876 (2019). His 2016 album 57th& 9th was his last unadulterated rock album that wasn’t carrying the weight of an overarching theme.

Up against the social media frenzy over Adele’s divorce album where a breakup has been analysed with the excruciating details, and close on the heels of Taylor’s Swifties losing their minds yet again over a scarf, Sting’s straight up rock album The Bridge released almost silently in comparison.

Barring the usual interviews in the media, social media discussions and TikTok collabs, Sting has let his music do much of the talking. Given that he isn’t hitting out at exes and writing about things as salacious, this pop-rock seducer-songwriter septuagenarian’s pandemic album is the still water that runs deep.

Water, in fact, is a recurring metaphor in the album that is titled The Bridge, a proverbial link over tough times, over relationships, a connector between disparate ideas and a solution Sting seeks to all that ails the world today. Cleverly and frequently cheesily, water appears and reappears either literally or otherwise to help us tide through the simple and mega complicated themes that make Sting anxious.

A quick listen of any album is unfair to the effort put in and The Bridge doesn’t make a good case for itself either initially. Conversational Sting with sparse melodic timelessness that usually mark his collaborations with Dominic Miller has meant that the album can easily be dismissed as an easy-but-predictable listen.

But Sting has a way of wooing you slowly and he shows no urgency in convincing you to stay. So being quick to judge the album as a collection of B-sides from his blockbuster collections will deprive you of a carefully thought-out string of songs that ebbs and flows at a pace of its own volition. It has a strong pop-rock vibe that defined his The Police and early solo years, but some of its best songs have Celtic and jazz influences. Typically Sting one would imagine. 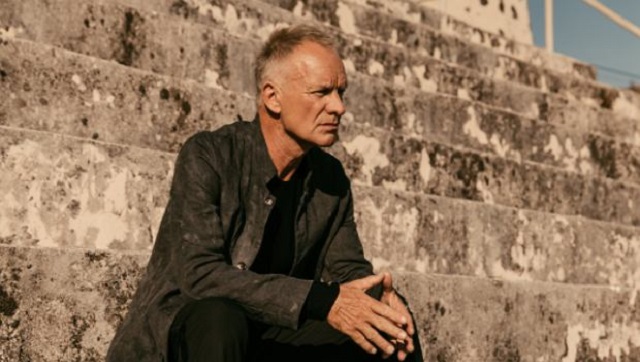 Opening with ‘Rushing Water’, Sting lays bare his apprehensions through the swelling of a river. ‘If It’s Love’ is easy on the ears, almost casual in the way it treats itself. The ‘Book of Numbers’ starts decisively and resonates with Dominic Miller’s sway on the proceedings. He even returns with haunting, almost stalker-feels writing like in ‘Loving You’, a song so conversational that the backing instruments are a faint part of the experience. But this very starkness works to his advantage when he so painfully sings, “We made vows inside the church to forgive each other’s sins, but there are things I have to endure, like the smell of another man’s skin. If that’s not loving you, I don’t know what is.” Sigh… these millennial writers have so much to learn from this British legend’s understated song-writing. That itself is refreshing from the House of Sting given that he has had a tendency to complicate sounds and cultures in the noughties.

Three songs in, Sting has unshackled further with the contrition of the water metaphor waning, going instead into deeper themes within our consciousness. ‘For Her Love’ is so reminiscent of Sting’s ‘Fragile’ and ‘Shape of My Heart’, with unmistakable hints of ‘Fields of Gold’. It’s the Sting we collectively fell in love with, the affirmation of a life-long love affair with his works. The violins and accordions contribute to the moody song with Celtic hues, ‘The Hills on the Border’. Dominic Miller’s subtlety shines in ‘The Bells of St. Thomas’ where Sting’s song-writing is at its most vivid glory, harking back to some of his lyrical classics like ‘Shape of My Heart’. The title track and Captain Bateman benefit tremendously from their folk settings while ‘Waters of Tyne’s’ acoustic experience is sheer brilliance.

Whenever Sting does an instrumental track it’s just as rich as his lyrical ones where intense chords and tones create a dramatic sonic world that we irresistibly put on loop. Think ‘St. Agnes’ and the ‘Burning Train’ from one of Sting’s best albums, Soul Cages. If the album that’s set in the ship-building milieu of his childhood home was one of his most ground-breaking works, then this water-filled outing’s most prolific piece comes in the form of ‘Captain Bateman’s Basement’, a song that is absolutely nothing like its almost-namesake. The jazz-dipped sensual track feels like we’re in the head of a musician who is tinkering around during soundcheck. Unbridled and uninhibited, it is Sting at his most primal, bass in hand, indistinguishable humming and a bloody good song.

The more you listen to The Bridge, the more the album grows on you, and the more you realise that as much there is water splashed all over the discography, the album is really about reaching out to people, to circumstances, to the divine. In an album full of troubled waters, we’re actually joining Sting on a quest to build bridges.

NEW YORK (AP) — Lloyd Morrisett, the co-creator of the beloved children’s education TV series “Sesame Street,” which uses empathy and fuzzy monsters like Abby Cadabby, Elmo and Cookie Monster to charm and teach generations around the world, has died. He was 93.

Morrisett’s death was announced Tuesday by Sesame Workshop, the nonprofit he helped establish under the name the Children’s Television Workshop. No cause of death was given.

In a statement, Sesame Workshop hailed Morrisett as a “wise, thoughtful, and above all kind leader” who was “constantly thinking about new ways” to educate.

“Sesame Street” is shown in more than 150 countries, has won 216 Emmys, 11 Grammys and in 2019 received the Kennedy Center Honor for lifetime artistic achievement, the first time a television program got the award (Big Bird strolled down the aisle and basically sat in Tom Hanks’ lap).

Born in 1929 in Oklahoma City, Morrisett initially trained to be a teacher with a background in psychology. He became an experimental educator, looking for new ways to educate children from less advantaged backgrounds. Morrisett received his bachelor’s at Oberlin College, did graduate work in psychology at UCLA, and earned his doctorate in experimental psychology at Yale University. He was an Oberlin trustee for many years and was chair of the board from 1975 to 1981.

Hilton took to Instagram on Tuesday and posted a photo that seems to show the 41-year-old new mom holding her baby boy’s tiny hand.

“You are already loved beyond words,” she wrote, adding a blue heart emoji.

The heiress did not say when her baby was born or provide further details, including a name.

“It’s always been my dream to be a mother and I’m so happy that Carter and I found each other. We are so excited to start our family together and our hearts are exploding with love for our baby boy,” she told People magazine.

Teigen summed up their best wishes with: “Congratulations so happy for you both!!”

The 37-year-old Kenyan crossed the line in a time of two hours, one minute and nine seconds, to beat by 30 seconds his previous best, set four years ago in the German capital city.

He had previously taken one minute 20 seconds off compatriot Dennis Kimetto’s 2014 record of 2:02.57 in Berlin.

Kipchoge had played down his chances of a world record in the build up.

“I am happy with my preparation and I think I was so fast because of the teamwork. Everything is down to teamwork,” he said.

On an overcast day in Berlin, Kipchoge, who has now won 15 of his 17 career marathons, ran the first half of the 26.2-mile race in 59 minutes, 51 seconds, prompting thoughts that he may become the first runner to break the two-hour mark in an official race

He has run a marathon in under two hours, in Vienna in 2019. However, that was not recognised as the official world record because it was not in open competition and he used a team of rotating pacemakers.

When asked whether he would attempt a sub-two hour run in Berlin next year, Kipchoge replied: “Let us plan for another day.