Award-winning Nigerian singer, David ‘Davido’ Adeleke on Saturday announced his donation of N250m to orphanages across Nigeria. That man is positively messing with the dynamics which control balance and nature.

According to the singer, the money came from his N100m challenge which raked in N201m in three days.

Making the announcement via his Instagram page, Davido stated that he has decided to add N50m to the donation from fans and colleagues.

In total, Davido is set to support orphanages across Nigeria with a sum of N250m.

Following the successful contribution, the singer has decided to give back to society.

Davido also set up a five-man committee to oversee the disbursement of the funds, as he promised that their activities would be made public. 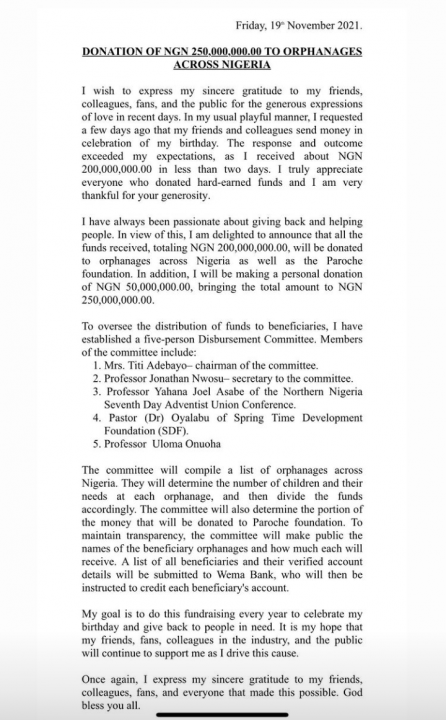 Below are those on the committee:

1. Mrs Titi Adebayo, who is the Chairman of the committee, is the founder/CEO of Paroche Reach Out Foundation.

The foundation was launched in loving memory of Taiwo ‘Paroche’ Adebayo, who passed away on August 20, 2012 as a result of injuries sustained when he was knocked over by a drunk driver in a hit and run incident. He was 26-year-old and a graduate of Babcock University.

The foundation was created to build on, and consolidate the virtues of Taiwo; to campaign against substance usage/abuse/addiction, and to bring about the desired and unprecedented post-rehabilitation care for those struggling with any kind of addiction.

2. Prof. Jonathan Chinaka Nwosu of the Faculty of Education is the Registrar, Babcock University. Nwosu is the Secretary of the committee.

4. Pastor (Dr.) Oyalabu Samuel is the Chief Executive Officer of Spring Time Development Foundation (SDF). The foundation, is a not-for-profit and nongovernmental body. The birth of SDF in 1996 was to harness and account for Deji Adeleke’s philanthropic deeds. Davido’s father, Adedeji Tajudeen Adeleke is the founder of the foundation.

5. Professor Uloma Doris Onuoha, a member of the committee, is the Librarian of Adeleke University.

Related Topics:[VIDEO] N100m challenge: Davido donates N250m to orphanages across Nigeria
Up Next

Nigeria: Govt Plans to Lift 35m Nigerians Out of Poverty in Five Years

Liverpool 4-0 Arsenal Win, Who nailed vs who struggled Player Ratings

Acute food insecurity is likely to deteriorate further in 20 countries or situations – hunger hotspots – during the outlook period of February to May 2022.

For the outlook period from February to May 2022, FAO and WFP are issuing an early warning for urgent humanitarian action in 20 countries and situations – called “hunger hotspots” – where parts of the population are likely to face a significant deterioration of acute food insecurity in the coming months that will put their lives and livelihoods at risk.

Targeted humanitarian action is urgently needed to save lives and livelihoods in the 20 hotspots. Moreover, in four of these, Ethiopia, Nigeria, South Sudan and Yemen, humanitarian actions are critical to preventing starvation and death. The report provides country-specific recommendations on priorities for emergency response and anticipatory action to address existing humanitarian needs and ensure short-term protective interventions before new needs materialize.